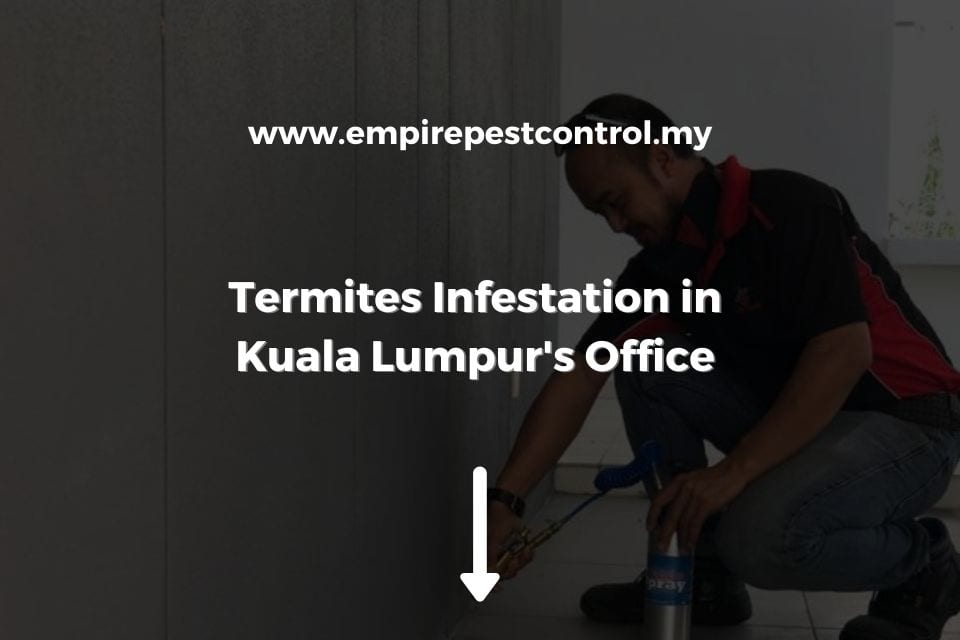 Mr. Raja a business owner from Kuala Lumpur who runs a furniture depot has had the worst case of termite infestation that almost ruined his company. They have tried to control and keep the termites at bay, but the pesky little creatures just kept on spreading. A swarm of termites was slowly building a colony under their wooden floor and gradually spread throughout the office, affecting some of the furniture they were selling.

“It happened so fast. I saw some worm-like creatures under my desk, but I didn’t suspect that it was termites. Before we knew it, the bottom parts of our furniture and our walls got affected.” Recalls a staff member of the company. Luckily, Mr. Raja heard about Empire Pest Control from a friend and contacted them right away. In less than an hour of booking, our professional pest control team from Kuala Lumpur came rushing and start working to get rid of the termite infestation.

Ever since that day, Mr. Raja has always relied on Empire Pest Control to deal with whatever pest problem may arise that can affect his business. “Empire Pest Control is a company I highly recommend to all my fellow business owners out there.” Mr. Raja says.

Mr. Raja who runs a furniture depot at Kuala Lumpur have had countless pest encounters in the past (rats, roaches, spiders), but the most severe one he has faced that almost shut down his business is a termite infestation. He was always worried that this might affect his customers and get a lash-back from the people.

But with the help of our pest control team from Kuala Lumpur, he didn’t have to deal with termite problems ever since. Mr. Raja has become a loyal customer for almost 10 years and loves the dedication each member of Empire Pest Control has shown.

Mr. Raja and all his workers have tried all the needed remedies and purchased the most expensive termite repellant, but it was useless since the infestation just kept on spreading. Mr. Raja wasn’t sure where the termite’s colony is, so they weren’t able to eradicate the termites effectively. The infestation started spreading from their walls, which affected their office and then the furniture they were selling. His workers would find trails of termites and saw-dust powder below their desks and tables.

Some termites began poking holes on the items they were selling, and the company’s walls began to sound hollow. Mr. Raja have had some pest problems before, but nothing could ever compare to this termite problem. If Empire Pest Control didn’t step in, he would have paid more than a fortune for repairs and refurnishes.

Even though the situation was out of control and the infestation was rapidly spreading, Empire Pest Control was able to eradicate the termites and stop any further progress. The company used state-of-the-art pieces of equipment and quality solutions that killed the bugs in an instant. Chemical sprays were used to remove any termite from a piece of furniture and items where they were found.

Furthermore, the exterminators were able to pinpoint the termite colony and carefully removed them from the site. Once their operation was done, they did a thorough inspection of all the areas and furniture in the office to ensure no termite was left behind. They then gave Mr. Raja some tips to help him, and his workers avoid getting a second wave of termite infestation.

Implementation Of The Pest Control

Mr. Raja has stated that he appreciates Empire Pest Control’s quality service towards him. They always call to check if they are having a pest problem and would come right away if they ever do.

“I’ve been in the business for years, and it’s quite a relief to know that I have a pest control service provider whom I can rely on regardless of what bug or insect I may be facing.” Mr. Raja said, “As a business owner, you have a lot on your mind such as your company’s image, your customer’s well-fare and your employee’s condition.

Whether it’s termites, roaches, rats, or spiders, Mr. Raja never had to deal with it alone. Empire Pest Control is always there to lend him a helping hand and because of this quality care and service, Mr. Raja’s business was able to thrive and become more successful. “I am much more confident when I see customers walking into my store because I know everything is in good condition. I don’t need to constantly worry if they might find rats or creatures running around my area— it’s just a relief!” Mr. Raja said. Empire Pest Control is truly a company he recommends to all his friends due to the never-ending help the company never fails to provide.