Types Of Ants That Bite and Sting 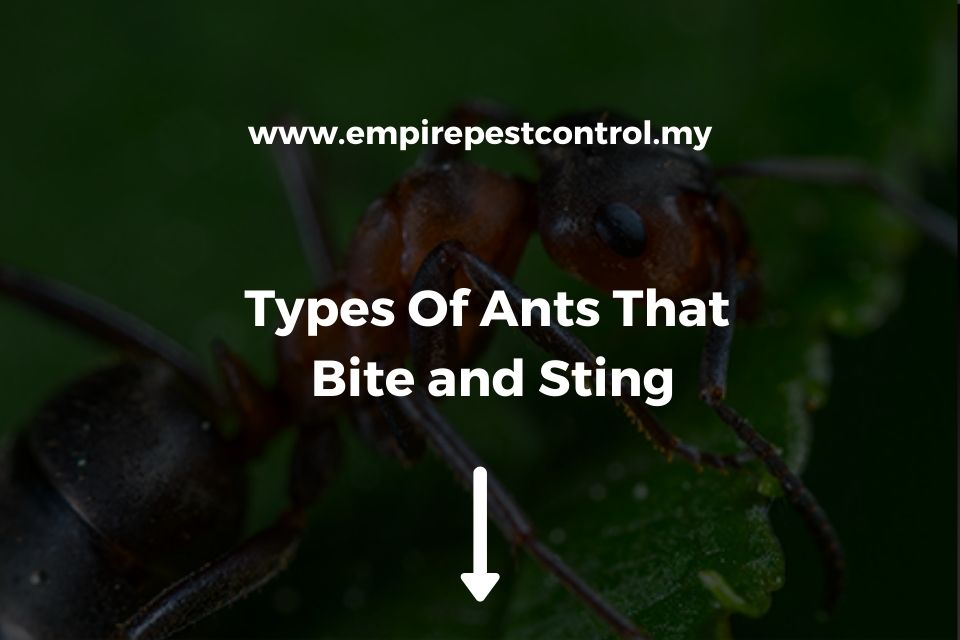 Ants are not only annoying, but some can also be dangerous. For example, one type of ant that has been known to bite and sting is the fire ant.

These ants are found all around the globe, and they have caused billions of ringgit worth of property damage due to their invasive habits.

This blog post will talk about different types of ants that bite and sting, so you know what precautions to take if you live in an area where these pests exist!

The Common Ants that Sting 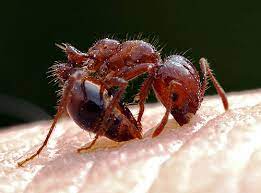 Despite being invasive creatures, some ants also have the ability to sting. So if you’ve ever found yourself out in the wilderness and you suddenly feel pain in your arm after brushing against a plant, that was likely due to an ant sting.

These ants can vary from being small and almost impossible to see with the naked eye all the way up to large red ones. When these critters are present in your property, it’s vital that you take action right away and call an experienced ant exterminator.

It’s important not only for you to know what type of ant stings but also how they sting as well so you can protect yourself better when you’re out and about!

The most well-known ants in Malaysia that have been distinguished to sting are the Red Imported Fire Ants. These ants have an excruciating bite, and they’re also known to be transporters of certain illnesses that can affect humans.

The bites from these insects are extremely dangerous because not only do their jaws end up breaking off in your skin but there’s also venom injected into you at the same time. Once bitten, you can expect to feel a burning, swelling, and stinging sensation in the area.

With this in mind, experts advise avoiding direct contact with fire ants and, if an infestation is present, call an exterminator straight away because being bitten by all of these insects at the same time can trigger an adverse response.

Harvester ants are ants that gather and keep seeds and grains as their food are also known to sting.

These ants can be found worldwide, but they’re most common in places where there’s a great deal of vegetation and trees. Despite being small, these insects have powerful jaws that clamp down onto you when they feel threatened or scared by anything nearby them.

One thing about harvester ants is their ability to identify which areas will have food around them, so that’s why having your campsite near one of these colonies is never recommended.

Like fire ants, the harvester ant’s bite and sting mechanism starts with the ant sticking to its target with its mandibles, then turning around the spot to continually sting and pump venom into the area.

Acrobat ants are another type of ant that you need to be careful with if they’re present in the area. These insects will protect their colony at any cost and deliver an excruciating sting when threatened by anything nearby.

Honeydew, sugary excrement generated by aphids and mealybugs, is a common food source for acrobat ants. They also consume both live and dead pests, notably termite swarmers. When disturbed, acrobat ants will sting, and workers in certain species may create an unpleasant odor when agitated.

What to Do When Ants Sting You?

If you’re out in the wilderness and you suddenly feel a very painful sting on your skin, you must take action straight away.

Depending on how many ants stung and bit you at once will determine if an ant venom detox is necessary to be done after being bitten. If there’s only one insect present, then you can opt for applying ice onto the area to reduce swelling and pain instead of committing yourself to take the medication immediately.

After this has been carried out, make sure to sign up for a course of antibiotics because infections may still occur despite taking preventative measures beforehand!

It’s also worth noting that different types of ants have their own unique ways of attacking, so that means knowing what type of ant will help you know the best course of action.

The Top Ants That Bite 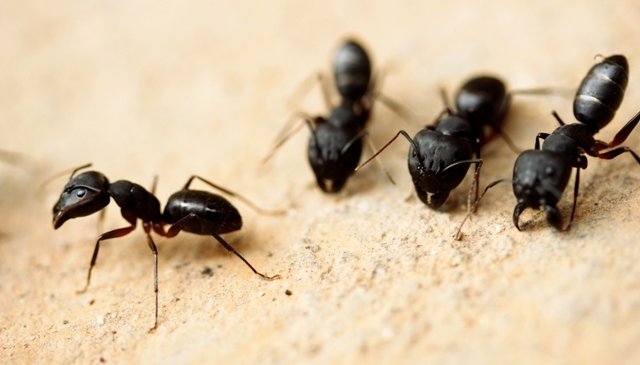 Although there are ants that have venom, not all ants are venomous. Ants that bite generally don’t have very powerful jaws or teeth like ants who sting do, so it’ll be easier to deal with them without the risk of any adverse reactions occurring.

The field ant gets its name from its fondness for living outdoors. These ants are commonly found in fields, parkland, yards, and meadows, where they make nests on the earth. Most field ant species dig a distinct mound of earth beneath the ground as they make their home, forming a unique mound of soil.

When threatened, field ants will bite the intruder to protect their colony. Their jaws are strong enough to break the skin, but they aren’t venomous, so you have nothing to worry about other than possible infection.

Carpenter ants are some of the harmless ants in the world. But although their bites and stings don’t pose a threat, the carpenter ants can still cause damage to your property.

These ants are commonly found in moist, rotten wood. If you have a termite infestation around your home, these ants will most likely be attracted to the same areas that the termites are invading due to their affinity for moisture and rotting trees.

If carpenter ants appear in your home or property, it’s best not to disturb them as they can bite you.

Crazy ants get their name because of how they move erratically. They are most likely to be found in homes or other areas with a water source nearby, but they can also make nests outside.

The crazy ant’s bite isn’t that painful, but it can be itchy. They don’t have venom in their stingers, so don’t worry about having to take any medication if you get bitten by them.

What to Do When Ants Bite You?

If an ant bites you, it’s best to clean the affected area with soap and water. It’ll also be a good idea to take some antihistamine tablets to reduce any possible irritation or discomfort that may occur after being bitten.

If you’re looking for a guide on what types of ants bite and sting, then this blog post is the perfect resource. We’ve provided detailed information on each type so that you can be prepared when your ant problem comes knocking at your door.

Whether it’s fire ants or harvester ants, we hope our article has given you some insight into dealing with these pests effectively! What do you think? Have any questions about the content discussed here? Let us know by reaching out!