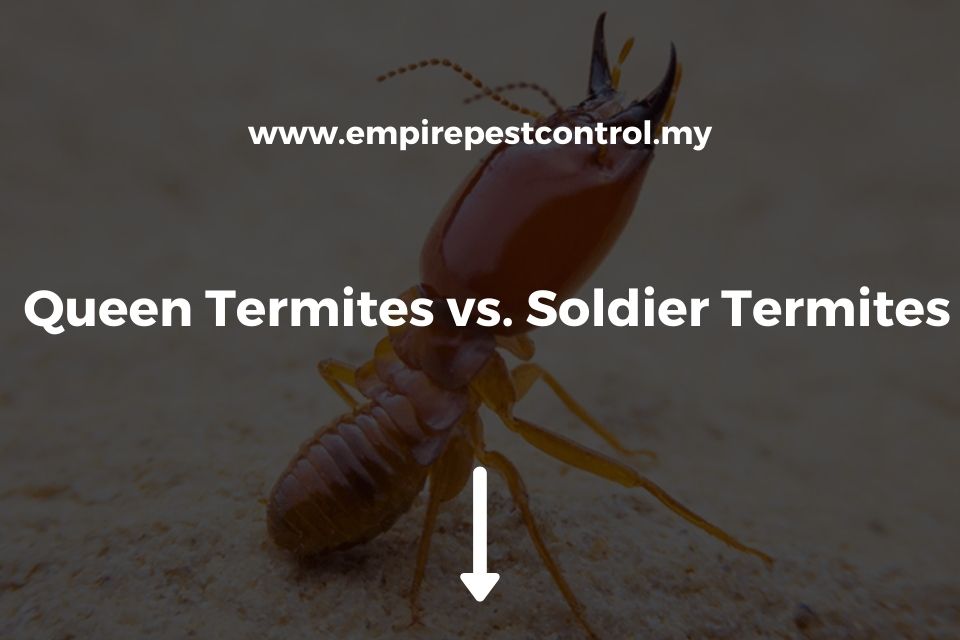 Termites are insects that can be found across the world, and they feed on wood. These creatures may seem harmless but they can wreak havoc throughout your property.

When this happens, you need a termite treatment service to get rid of termites

There are two types of termites; Queen Termites and Soldier Termites.

Though this may seem like a basic topic, this blog post will go in-depth into what these different types of termites do and how you can properly identify them so you know what type to get rid of.

What Are Queen Termites?

You may have never heard of this before especially when it’s your first time dealing with termites but just like other critters, termites have their own queen as well.

Queen termites are the most likely to produce eggs and they also lay the eggs for their colony.

A queen termite can live up to 20 years in her lifetime and she is significantly larger than other worker termites when mature.

With this in mind, queen termites can reproduce more than millions of termites throughout their life span.

The queen’s abdomen will be wider, rounder, and have a protective shield of pliable abdominal tergum while workers are more flat-backed with shorter abdomens that lack these features.

Queen termites have one purpose only and that’s to reproduce and lay eggs which is why they’re the hardest to get rid of.

Unlike the soldiers, a queen termite will never venture outside of the colony except for mating purposes because they’re much more important to the colony.

Soldier Termites and Everything About Them

Soldier termites are the backbone of every termite colony since, without them, the nest wouldn’t be protected and the queen will not be able to produce more eggs.

Soldiers are the only termites that venture outside of their colonies and they will do so when there is a food source nearby or if they’re being threatened by something which then forces them to defend themselves.

A soldier’s primary role is defending the colony from predators as well as other insects like ants, cockroaches, and beetles who may want to invade it for resources.

These soldiers will step up first before any other type of termite does since its job is very important in order for everything else inside the nest to work correctly.

Some might say this makes them brave but you could also call it selfless because these soldiers put themselves at risk even though they don’t reproduce.

This way, all types of termites in the colony will be able to work and feed on wood without any interruptions.

The soldier termite’s head is wider, shorter, and flatter with a pointy mandible for biting while their antennae are short but has three segments that differ from queen termites who have four or five sections on theirs.

Soldier termites also have an elongated waist segment that distinguishes them when looking at other types of worker termites which all tend to look similar. This way you’ll know what type of nest you’re dealing with before it gets worse.

What to Do With Termite Problem?

If you’ve got a termite colony right under your nose, it’s vital that you know what you’re dealing with.

If the colony is made up of queen termites, it’s best to call a professional who can come and remove them as soon as possible because these types are harder to get rid of which may cause an infestation if left untreated.

On the other hand, if soldier termites have breached your home or property then there’s no need for alarm since they’re easier to get rid of than their counterpart but still require treatment just in case.

No matter what type you find yourself dealing with, always remember that prevention is better than cure so be sure to take every precaution necessary before anything else happens!

It is important to know The Differences Between Queen Termites and Soldier Termites because these differences can lead you to the wrong conclusion.

There are many other things that might be going on with your termite infestation, so make sure you call a professional for help!

We hope this article has been helpful in learning about how queen termites differ from soldier termites.