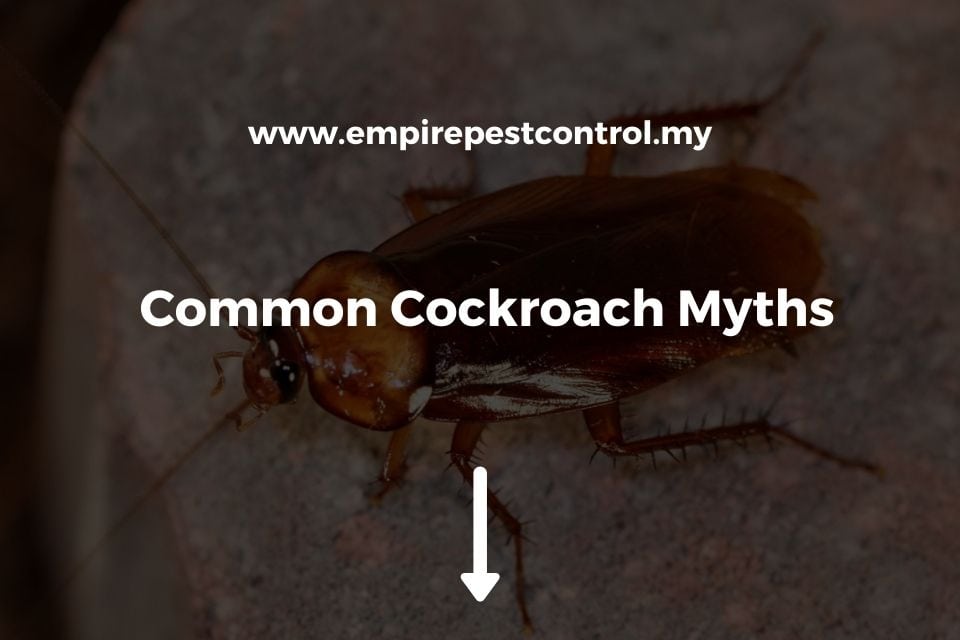 Cockroaches are among the most common pests found in homes. They can quickly infest an entire home and cause a lot of damage. However, there are many myths about cockroaches that homeowners should be aware of before they take action to get rid of them. This blog post from the experts in cockroach control will finally debunk these misconceptions!

Many people often think that roaches are indestructible since they can live without a head for up to a week. They’re even said to be the most likely survivor if a nuclear bomb were to drop! However, roaches can certainly be killed.

Roaches can live without a head due to how their body operates. Some cockroaches have a reflex called “crustulan equilibrium,” which allows them to continue living even if they are decapitated. This process often causes their antennae or appendages to grow out of their body.

In the end, roaches can still be killed even if it may seem like they’re impervious to their head being chopped off.

All Cockroaches Can Fly

Have you ever encountered a terrifying experience of a cockroach flying in your face? It may feel like they’re able to fly, but this isn’t exactly true.

While some species of cockroaches are capable of flying, most are not. Most roaches can only glide using wings that they have attached to their abdomen. These wings aren’t strong enough for the insect to actually take flight when airborne. So when it seems like a cockroach is taking flight, it’s really just gliding in the air.

There are species of cockroach that can actually fly. This is because they have fully-developed wings that are capable of flight. These types of roaches can maneuver in the air and even fly for short distances.

Many people think cockroaches only come out in the dark of night when everyone is tucked in bed. However, that’s not true!

While most roaches are nocturnal, it doesn’t mean they only come out at night. Some cockroach species can be active during the day, and some may even come out in broad daylight. This type of behavior is mostly seen with younger roaches or infestations with a small number of roaches present.

Roaches tend to scatter away not because you shine a light on them but because they’re more afraid of humans than they are of the light. Roaches have been known to scatter when humans show themselves, even if a flashlight is the only source of light in the room.

Cockroaches Can Survive a Year Without Food or Water

One popular myth about roach facts is that they can survive up to a year without food and water. This is false since most cockroach species die after just one week without water.

In order for cockroaches to live longer than a few weeks, there needs to be an unlimited food supply and ample humidity levels in their environment. When these conditions are met, cockroaches can actually live quite long, with some living up to months without food!

As long as there is moisture or water present, roaches can survive for weeks. But if they are deprived of either water, roaches will not last more than one week.

It’s crazy to think that people actually believe cockroaches are clean. Most people imagine them walking through garbage and dead skin cells, right?

Although some cockroach species are cleaner than others, it doesn’t mean they’re clean. Cockroaches have been found carrying pathogens that cause food poisoning in humans while walking on dirty surfaces. It’s best to keep all areas of your home clean since roaches can easily move into an unclean space.

There are many different types of cockroaches out there that have adapted to living in different conditions around the world. Be sure to educate yourself before taking action against a cockroach infestation!

Cockroaches Can See You

Lastly, another common myth is that cockroaches can actually see people. Cockroaches do not have eyes capable of seeing images as humans do.

Cockroaches only provide their sense of sight by detecting changes in light and darkness which help them find food, water, and dark places to hide. So if you want to keep roaches away from your home, try keeping the lights on!

Also, the hair in their bodies helps them detect movement and airflow, which helps cockroaches “see” where potential threats are.

We hope that this article has helped you to dispel some of those pesky myths about cockroaches. Now go ahead and share with all of your friends – they might need help getting rid of their roach problem too! Have any questions or comments? Feel free to leave them below in the comment section.