What Methods and Chemicals do Exterminators Use For Roaches? 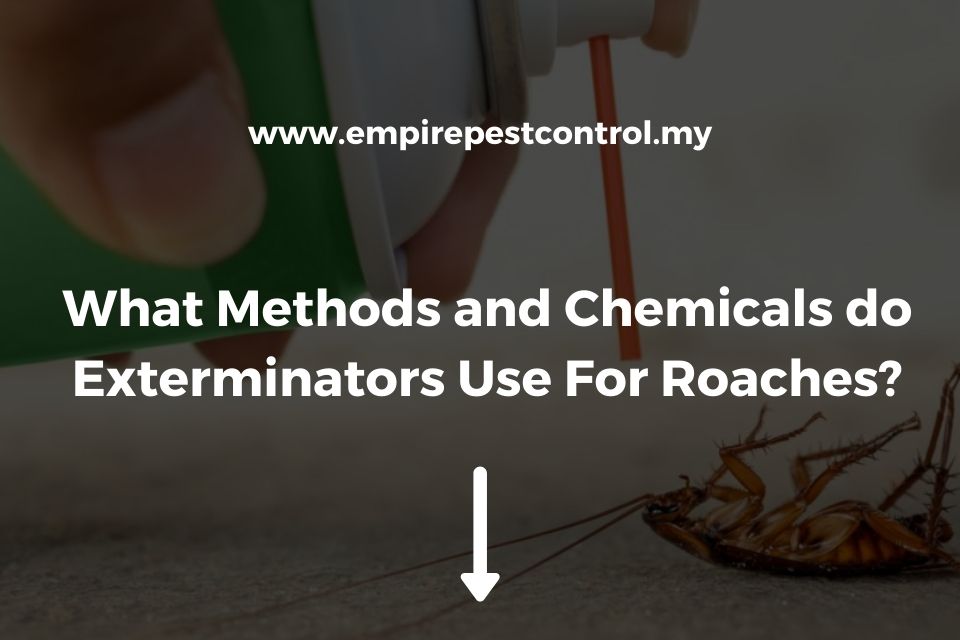 Roaches are one of the most common household pests. They can cause major health issues in humans and even transmit diseases. Cockroaches also contaminate food, dishes, bedding, and other items in your home with their droppings which contain bacteria that are harmful to humans. When you suspect roach infestation, it’s important to contact an exterminator right away for best results.

There are many methods and chemicals used by professional exterminators when dealing with roaches, and in this blog post, we’ll talk all about it. Read on below to know more:

What Methods Do Exterminators Use to Stop Roaches?

Nothing compares to the fear we get when we know we have a cockroach infestation. Roaches are dirty and have a very bad smell that can stay in your house for more than a month. In terms of appearance, roaches are ugly-looking bugs with long antennas on their heads and leathery forewings. They have six legs and an oval-shaped body with spiky hairs all over them.

In order to prevent the further spread of infestation, exterminators often use methods to stop them. Depending on the severity of the infestation, they may use pesticides or non-chemical methods.

Among the methods exterminators use to deal with roaches are:

Among the most common methods used by exterminators when dealing with roaches are the use of gel baits. In this method, a chemical called hydramethylnon is mixed with an attractant so that when roaches eat it, they die in a matter of days.

Exterminators place these bait traps near areas where you’ve spotted roach activity, and the more active the infestation area is, the more number of traps you need to place at a greater distance from each other.

The main advantage of using gel baits is that because they’re moist, they can be used in areas where water may have been present such as cracks and crevices, which would make it very difficult for dry types of pesticides to work.

For worse infestations, exterminators may use tents to fumigate the house. In this method, all entry points are sealed, and any cracks are filled so that no air can escape out of it. Chemicals will then be pumped into the house, and as they fill up, roaches will start dying.

Unfortunately, this method is not safe for someone who’s pregnant or has a respiratory condition to be around. Moreover, after you’ve completed fumigation but you can’t stay inside for at least a few days, which means everything in your house gets exposed to the chemicals and could damage something, including electronics or furniture.

This is why tent fumigation isn’t used unless it’s very necessary; also because it’s safer and cheaper to use pesticide gel baits instead of such costly treatment.

There are certain chemicals used by exterminators to kill roaches. Out of these, some commonly used chemicals are:

Boric acid has been around for more than a hundred years and is considered one of the safest methods used when dealing with a roach infestation. This chemical is water-soluble, so when roaches eat it, they die in a matter of days because it takes time to dissolve completely inside their stomachs and eventually kills them.

the irritant chemical is found in many commercially available cockroach baits, controls ants, and is also used in termite bait stations. Cockroaches that eat this chemical will die within a few minutes because it will completely dissolve inside their stomach. Because of its action, it can be an effective bait for larger roaches; and though it’s very toxic if ingested by pets and children, the risk is minimal when used as directed.

Fipronil is an insecticide that works by blocking the insects’ GABA receptors which are responsible for transmitting nerve impulses to muscles. Exterminators use this chemical to control roaches both indoors and outdoors because it’s very effective, especially when dealing with German cockroaches, who are said to be among the most common types of infestation.

Are These Methods and Chemicals Safe?

With proper precautions, the methods and chemicals used by exterminators are safe for your family. As always, before letting any professional in to take care of the infestation, it’s best to get a full background check on them so that you’re not risking yourself or your family being exposed to danger.

It’s also important that you ask for their credentials because some people will just claim to be an expert when they don’t have the necessary experience.

Once you’ve hired someone, make sure they give you instructions on what needs to be done so that if anything goes wrong, you know who’s responsible for dealing with it.

Moreover, while they’re working in your home, it’s crucial that kids and pets are kept out of rooms where chemicals may have been applied, especially if the chemical used is harmful if ingested directly.

Doing things on your own to get rid of cockroaches can be difficult because you may not have the time, manpower, or know-how needed to take care of it yourself completely. The best way to eliminate this problem once and for all is by hiring someone who knows what they’re doing.

Now that you’re aware of the methods and chemicals used by exterminators to kill roaches, you should be able to ask the right questions so that you can hire someone who knows what they’re doing.

As always, if you have any doubt about what needs to be done, it’s best to get a professional opinion so that you don’t risk exposing your family or anyone else to toxic chemicals!