Types of Beetles in Malaysia 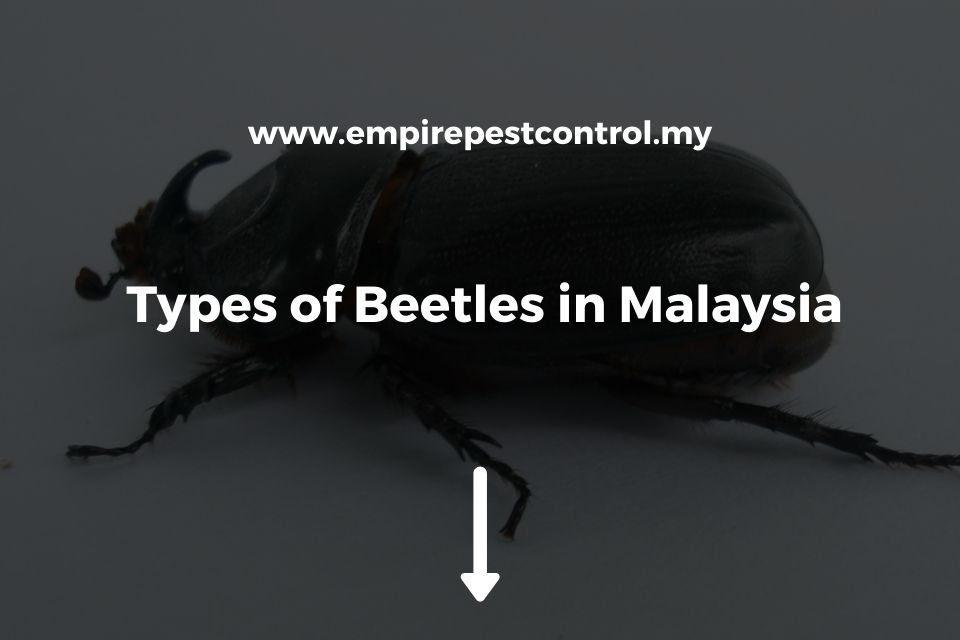 There are many different types of beetles in Malaysia, and some of them can be quite dangerous. In this blog post, we will discuss some of the most common beetle species in Malaysia, as well as their characteristics and how to identify them. So, if you want to learn more about the beetles found in Malaysia, keep reading!

PS: If you are having problems with beetles on your property, get a quote for pest control service today! Our team of experts will help you deal with these creatures to ensure they won’t annoy you anymore. 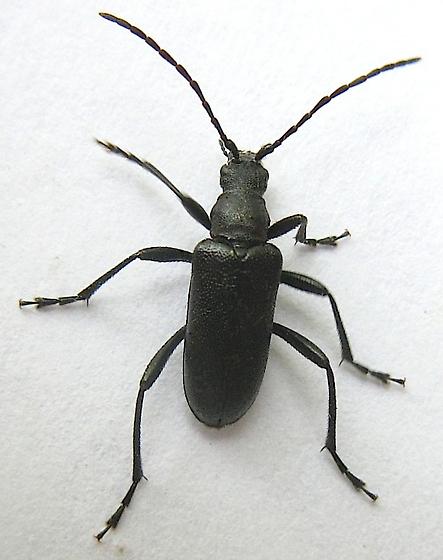 The Longhorn Beetle, also called a longicorn, is a large, yellow, black, and orange beetle that can be seen in Malaysia and is often mistaken as wasps. It has long horns on its head and can be quite dangerous if it is disturbed. These beetles feed on woody plants and can cause significant damage to forests if they are not controlled.

The Violin Beetle is small; it can be black or brown in color. They are found throughout southeastern Asia. It gets its name from the violin-shaped marking on its back. This beetle is usually harmless to humans but can be a pest to crops and gardens. Trilobite Beetle, also referred to as net-winged beetles, is a small, red-colored beetle. They usually grow out from five to six millimeters long. It gets its name from the three lobes on its thorax. The thing about these creatures is that females and males do not look alike.

Most Trilobite Beetles that can be found are usually females. They also have long antennae-like other beetles. This creature is harmless to humans but feeds on flowers and other plants.

The Long-Armed Scarab Beetle is a large beetle that can also be found in Malaysia. It is black or dark brown in color with long pair of legs. Males have fixed median and apical spines, whereas females have a moveable terminal spine on their long legs. This beetle feeds mainly on rotting wood but can also be a pest to your plants in the garden. 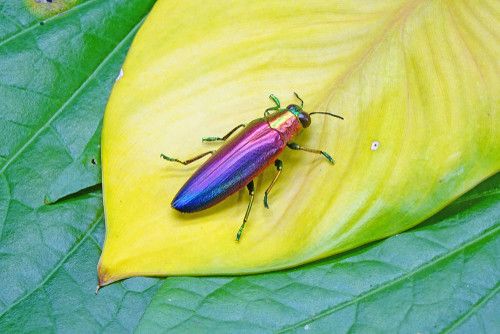 The Jewel Beetle is the common term for beetles in the Buprestidae taxonomic family, which are beautifully colored and gleaming to a degree. Because of their remarkable glossy bright hues and shimmering carapaces, jewel beetles are sometimes known as metallic beetles or wood-boring beetles.

Although jewel beetles can be found all over the world, the bulk of them is found in the northern hemisphere.

The horn-like extensions on and around the males’ heads give rhinoceros beetles their name because they are herbivorous insects. Some are covered with soft hairs and are black, gray, or greenish in hue. The Hercules beetle is another name given to certain of these beetles because they boast a strength of stupendous proportions.

Some species’ adults have the ability to lift up to eight hundred fifty times their own weight. In order to avoid danger, the beetles dig themselves into leaf litter and soil, which is equivalent to a human lifting nine fully grown male elephants.)

They can also do this with the help of their horns. Rhinoceros beetles are some of the world’s largest insects, with a length of up to six inches.

Scarab beetles have a strong oval shape and are compact and heavy-bodied insects. Their unique antennae, each of which ends in three flattened plates that join together to form a club, set them apart from other beetles. To make digging easier, their front legs’ outer edges are frequently serrated or scalloped.

The Atlas beetle’s larvae are known for their ferocious behavior, which is a fascinating fact about it. Even if just touched, the larvae are capable of biting. If there isn’t enough room or food, larvae that live together are known to fight to the death.

The diversity of beetles in Malaysia is astounding, and it’s clear that there are many more species yet to be discovered. This post has hopefully introduced you to a few of the different kinds of beetles found in this wonderful country, and we hope you will take the time to learn more about them.

If you have any questions in mind, feel free to call us today!