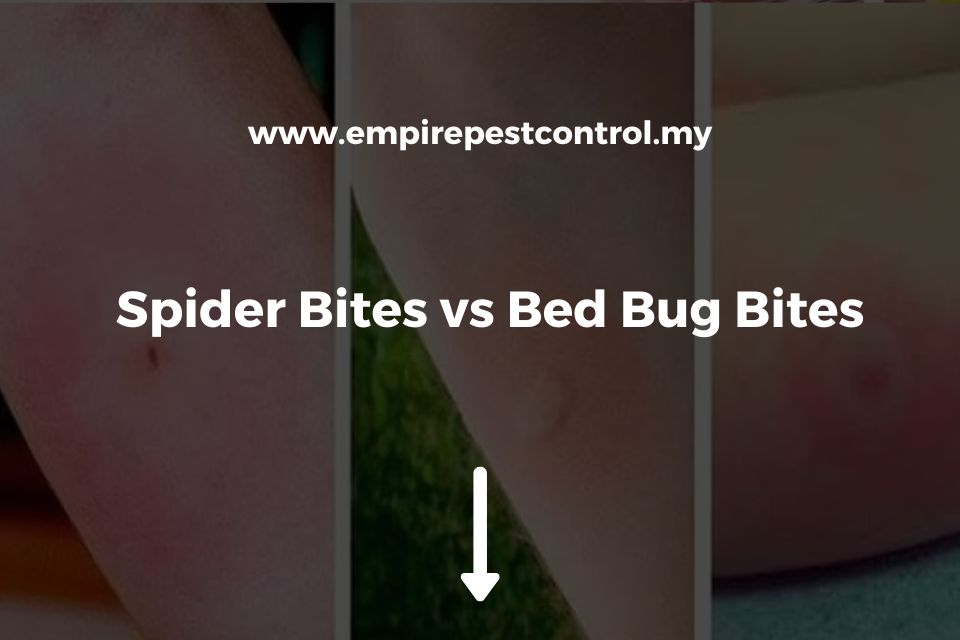 Do you know the difference between spider bites and bed bug bites? Many people don’t, and that can lead to a lot of confusion. In this blog post, we will discuss the differences between spider bites and bed bug bites. We will also provide tips on how to identify each type of bite, and what steps you should take if you are bitten by either a spider or a bed bug.

P.S. Need help to get rid of pests such as spiders or bed bugs? We have years of experience in dealing with all sorts of pests, and we will be more than happy to help you get rid of your pest problem. Contact our pest control experts today!

Spider bites can vary in appearance depending on the type of spider, the person’s individual reaction, and whether or not the spider is venomous. Bed bug bites, on the other hand, are much more consistent in appearance. If you suspect that you have been bitten by a bed bug, chances are good that your suspicion is correct. This is because bed bug bites usually appear in a line or cluster, and they are often very itchy.

Bed bug bites are small, red, raised bumps that appear in groups of three or more. They are often compared to mosquito bites, but they tend to be larger and more pronounced. Bed bug bites usually occur on the face, neck, arms, and hands, and they can be extremely itchy. In some cases, bed bug bites can also lead to secondary infections.

Spider bites, on the other hand, are typically much smaller and only occur as a single bite. They also tend to be much less itchy than bed bug bites. Spider bites often occur on the legs and feet, as spiders typically bite when they feel threatened. In rare cases, spider bites can also be poisonous, but this is much more common with certain types of spiders, such as the black widow spider.

Spider Bites are Bigger when compared to Bed Bug Bites.

Spider bites are usually larger than bed bug bites. This is because spiders have longer fangs and can inject more venom. The venom of some spiders can cause skin necrosis, which can lead to a large open wound. In contrast, bed bugs have very short mouthparts and cannot inject much venom. They also do not have the ability to cause skin necrosis. As a result, their bites are typically much smaller. Spider bites can also be more dangerous because some spiders are poisonous. If a person is allergic to spider venom, they may experience a life-threatening reaction. Bed bug bites, on the other hand, are not dangerous and typically only cause minor swelling and itching.

Spider bites are among the most feared venomous wounds because their severity is so variable. Some spider bites cause local redness, swelling and pain, while others may result in more serious conditions such as tissue necrosis (death) or systemic effects (affecting the entire body). Bed bug bites, on the other hand, are much less variable in their severity. While some people may experience no reaction at all, others may have local redness and swelling. In rare cases, an allergic reaction to bed bug saliva can occur, but this is usually not serious and can be treated with antihistamines. So while both spider and bed bug bites can be unpleasant, it is important to remember that spider bites have the potential to be much more dangerous.

When it comes to creepy crawlers, few creatures are as feared as spiders. Their bites can be painful, and some species can even cause serious illness. However, there’s one thing you may not know about spider bites: they tend to get infected more quickly than bed bug bites. There are a few reasons for this. First of all, spiders tend to have sharper teeth than bed bugs, which makes it more likely that their bites will break the skin. Second, spiders often inject venom into their victims, which can lead to further tissue damage and make it easier for bacteria to enter the body.

Finally, bed bugs generally feed on blood from larger animals, so their mouthparts are not as well-suited for penetrating human skin. As a result, spider bites are more likely to become infected than bed bug bites. So next time you find a spider in your home, take care to avoid getting bitten!

Spider bites are usually painful because of the venom that spiders inject when they bite. The venom is designed to kill or paralyze prey, and it can cause a burning sensation when it comes into contact with human skin. Bed bug bites, on the other hand, are not generally painful. Bed bugs are not venomous, and their bites typically only cause a mild itching sensation. In some cases, people may not even realize that they have been bitten by a bed bug. However, bed bug bites can become irritated and inflamed if they are scratched, and they can sometimes lead to secondary infections.

Bed bug bites are more common than spider bites for a variety of reasons. First of all, bed bugs are able to survive in a wide range of environments, from homes and apartments to hotels and office buildings. In contrast, spiders are found primarily in outdoor areas. This means that people are much more likely to come into contact with bed bugs on a regular basis. Additionally, bed bugs are attracted to body heat and the carbon dioxide that we exhale, making them more likely to bite humans than spiders. Bed bugs often feed in groups, which increases the chances that someone will be bitten multiple times. All of these factors combine to make bed bug bites much more common than spider bites.

Here are some frequently asked questions about spider bites and bed bug bites:

What are Bed Bug Bites?

Bed bug bites are welts that appear on the skin after a bed bug has fed on blood from its human host. The bites are usually red and itchy, and they may be found in groups of three or more.

What are Spider Bites?

Spider bites are puncture wounds that appear on the skin after a spider has bitten its victim. The bites are usually painful and may be accompanied by swelling or redness.

When Do Spiders and Bed Bugs Bite?

Spiders and bed bugs typically bite at night, when their human hosts are asleep. This is because the insects are attracted to body heat and the carbon dioxide that we exhale.

Now that you know the difference between spider bites and bed bug bites, you can take steps to avoid getting bitten by either one. If you do find yourself with a bite, be sure to clean it well and watch for signs of infection. And if you’re ever unsure about what kind of bite you have, don’t hesitate to contact a medical professional for help.