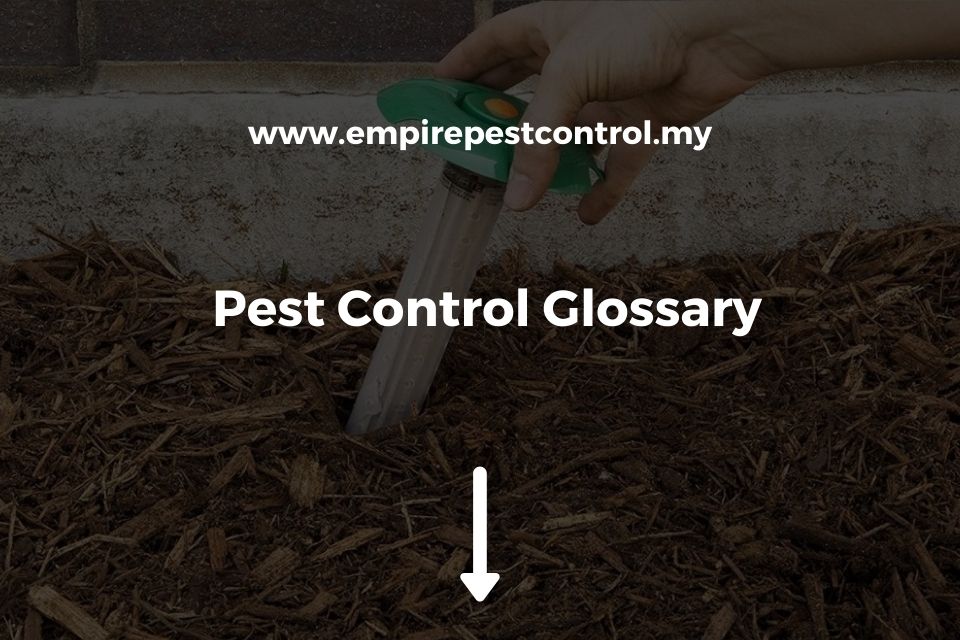 Pest control is one of those necessary evils that most people would rather not think about.

If you’re reading this, then you’ve probably got a pest problem and need to know more about it. This glossary by our team at Empire Pest Control will help explain the terminology used in the pest control industry so you can better understand what’s happening when pests invade your home or business.

Bait station is a pest control device that uses the pest’s natural attraction to a food source (such as food or water) to kill them. It can be used as a pest control measure for ants, cockroaches and other pests.

Bait stations are designed to be set up around areas in which pest activity has been observed or is expected to take place. This can include homes, office buildings, warehouses, farms and more.

The bait is often food-based but water-based based bait stations can also be used.

Blowflies are pest species that belong to the Diptera order and have a short life span. The eggs are laid in manure, decaying matter or other decomposing organic substances where they hatch into larvae which feed on animal tissue before pupating into adults.

Bug bomb is the name given to pest control products that release insecticide vapors into enclosed spaces.

Bug bombs are widely used on farms, in homes, and other buildings because they can be less costly than professional pest control services. They can also be effective against pests not sensitive to a particular form of pest control such as fumigation or pesticides.

Fumigation is pest control used to eliminate pest populations by exposing them to a toxic fumigant, typically in the form of gas or vapors. It is most often applied as an industrial pest management technique for controlling soil pests such as termites and white ants.

An insecticide is the name given to pest control products that are intended for use against insects.

Insecticides can be classified by the way they kill pests, whether it is poisoning them or acting as a repellent; and also by their method of application, which may be in various forms such as aerosols, liquids, dust or gases.

Invasive pests are pest species that are not native to the ecosystem under consideration, and whose introduction causes or is likely to cause economic harm or environmental problems.

Larvae are the young stage of insect, in contrast to the larva or caterpillar stages of other arthropods.

The larvae typically have a larger head relative to their body size and spend most of their time feeding on plant material that is chopped up by mandibles in front of them for this purpose.

Lure is pest control in the form of a chemical, olfactory, and/or visual stimulus that attracts pest species to where they are more easily caught.

Lures can be glandular secretions from one insect (examples being honey bees or termites), artificial substances designed for use with traps such as pheromones or food bait, or even pieces of plants or other organisms that are known to attract pest species.

Rodenticide is pest control in the form of a chemical, olfactory, and/or visual stimulus that attracts pest species to where they are more easily caught.

Rodenticides can be glandular secretions from one insect (examples being honey bees or termites), artificial substances designed for use with traps such as pheromones or food bait, or even pieces of plants or other organisms that are known to attract pest species.

Rodents are pest species that are typically considered to be pests because of the detrimental damage they cause.

Rodents can include mice, rats, squirrels, and voles.

Termites are pest species that are typically considered to be pests because of the detrimental damage they cause.

Termites can include subterranean termites and drywood termites.

Termite colonies often contain specialized workers whose primary function is foragers with a diet consisting entirely or primarily of wood, fungi, and other cellulose materials such as cardboard, paper, and cotton.

Termite colonies can be identified by a large number of pest control methods that are available to pest professionals, including pest insecticides/pesticides (chemicals) or physical traps such as pheromones or food bait, or even pieces of plants or other organisms that are known to attract pest species.

Pest infestations are usually the result of pest control methods employed to exterminate pest populations, such as chemicals and physical traps.

Repellants are pest control products that create a physical barrier to pest access. The most common type of pest repellant is the pesticide, which repels pests through its unpleasant taste or odor. Plant-based natural solutions are also effective and provide pest management without chemicals.

IPM is known as Integrated pest management and is a pest control strategy that combines pest prevention, monitoring for pests, pest eradication with the least possible amount of pesticide.

IPM has been successful in reducing insecticide use while maintaining crop yields. By using pesticides only when needed instead of on an ongoing basis IPM can reduce potential health risks and environmental impacts associated with those chemicals.

If you’re interested in learning more about pest control and the terms that are used, this post is for you. We hope it was informative and has helped to answer some of your questions on what types of pests there are, how they get into homes or businesses, and which treatments will best suit your needs. It can be hard to keep up with all the buzzwords around pest control terminology so we wanted to provide a glossary of common words as well as an overview of why certain methods work better than others depending on the type of infestation. Let us know if you have any other questions!