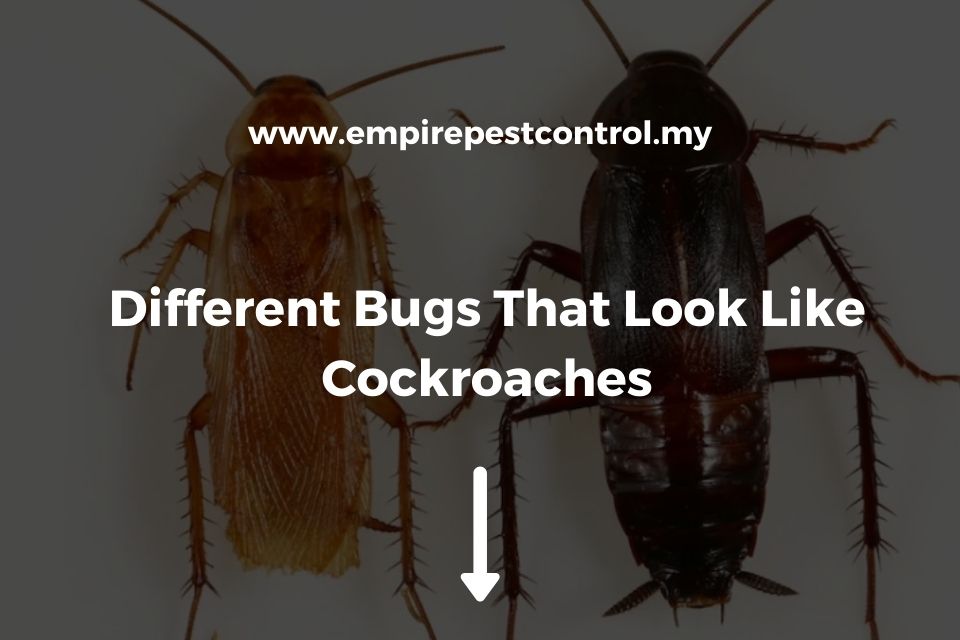 It’s no secret that cockroaches are disgusting pests that can invade any home. These insects carry germs and can contaminate food, which is why they’re so dangerous to have around the house. However, it is important to know that not all bugs resembling cockroaches are actually one!

Some of these look-alikes may cause more harm than good if you try to get rid of them with an insecticide or other means. Here are some different types of bugs you might find in your home that look like cockroaches:

PS: Don’t want to deal with cockroaches on your own? Don’t worry because we’re here to help! Our experts can remove roaches in your home for good so that you can have peace of mind in your living space. Give us a call and get a quote for professional cockroach services!

Giant water bugs are a type of aquatic insect that love to live in warm, rainy climates.

You might find this bug near a pond or river if they’re nearby.

Giant water bugs can grow up to two inches long and have flat bodies with different shades of brown.

It’s hard to miss these bugs because they have huge pinchers that resemble those on cockroaches!

While most people often mistake them for cockroaches, giant water bugs are not dangerous at all.

If anything, they feed off other insects and fish so you don’t have much to worry about here.

May beetles are often confused with cockroaches because they’re about the same size.

This bug is also dark and shiny like a roach but has a lot of differences in terms of appearance.

The most notable difference is the tail behind its head. May beetles have long, thin antennae that resemble legs you would see on a centipede or millipede–not a roach!

They like to eat plants, which is why they’re often found in gardens.

Crickets are a type of insect that is very similar to roaches in terms of shape and coloring.

Both these bugs have dark exoskeletons and long antennas.

However, crickets do not fly as roaches do, so you will most likely only see them on the ground.

Another difference is that crickets can jump! Roaches cannot, and they only crawl around slowly.

Thankfully, crickets usually don’t bite humans or cause any harm, so you won’t need to worry about getting rid of them if they’re just passing through your home for now.

Asian long-horned beetles are a type of beetle that only grow up to about an inch and a half in size.

They have dark backs with narrow antennae similar to those on roaches, as well as six legs.

What’s different about these bugs is their front wings. They’re used for flying, but they cannot fold, unlike those of cockroaches.

This insect actually poses a danger to the environment since it eats so many plants and trees!

These bugs are similar in appearance to roaches, but they’re not actually related to them!

You might find this bug around trees, plants, and shrubs at night.

These bugs can grow up to two inches long and have wings that resemble those on may beetles.

They also have six legs like roaches with dark coloring all over their bodies.

Palmetto bugs do make contact with humans more often than other types of bugs, but their bites aren’t harmful–that’s not true when it comes to most cockroaches, though! So although these pests look similar, it’s important you don’t try to use insecticides or other methods to get rid of them.

You may actually end up harming yourself instead since palmetto bugs aren’t the same as roaches!

We hope you have been able to identify which pest is living in your home or workplace by now and are properly taking action to eliminate it from your space.

Remember that there are many other insects out there besides roaches, and they can all cause damage if left unchecked for too long!